Away with the Fairies

"This series is the best Australian import since Nicole Kidman, and Phryne is the flashiest new female sleuth in the genre."

It's 1928 in Melbourne and Phryne is asked to investigate the puzzling death of a famous author and illustrator of fairy stories. To do so, Phryne takes a job within the women's magazine that employed the victim and finds herself enmeshed in her colleagues' deceptions.

But while Phryne is learning the ins and outs of magazine publishing first hand, her personal life is thrown into chaos. Impatient for her lover Lin Chung's imminent return from a silk-buying expedition to China, she instead receives an unusual summons from Lin Chung's family, followed by a series of mysterious assaults and warnings.

"Phryne infiltrates the staff of Women's Choice with all the aplomb of Lord Peter Wimsey taking on the advertising game, casually dispensing balm to fragile egos and down-to-earth fashion advice while she penetrates the secrets of the magazine's agony page and follows a tortuous trail of clues to a suitably unexpected conclusion." -Adelaide Advertiser

Kerry Greenwood won the Lifetime Achievement Award from the Crime Writers' Association of Australia in 2003. She has written eighteen books in the Phryne Fisher series (pronounced Fry-knee, to rhyme with briny) with no sign yet of Miss Fisher hanging up her pearl-handled pistol. 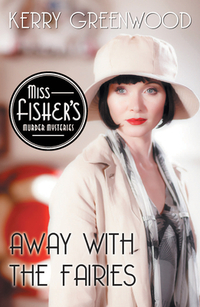