Dawn of the Dog

The Genesis of a Natural Species

The dog may not be what most think it is. The common origin of the dog story says the dog was a gray wolf that "somehow" turned into the dog after it associated with humans. Dawn of the Dog reveals this idea is merely an assumption based on nothing except that wolves and dogs are similar. Author Janice Koler-Matznick, a biologist specializing in behavior, proposes that the dog is a natural species that attached itself to man. She builds the case that the dog is a unique relative of the gray wolf, and that because of false assumptions we have misinterpreted our Best Friend's behavior.

Part I of Dawn of the Dog exposes the assumptions of the dog as a gray wolf myth, explaining why that wolf is an unlikely candidate for prehistoric domestication. Instead, based on the behavior and structure of the dingoes and aboriginal village dogs, and on the traits of wild canids that have adapted to living near people, Koler-Matznick argues that the original natural dog was probably a generalist scavenger and small game predator.

The most important aspect of this Natural Species Hypothesis is that, contrary to popular belief, the dog was not a pack hunter like the wolf. This means our understanding of dog behavior has been based on a wrong assumption. Part II of Dawn of the Dog is a showcase for the most natural dogs, the dingoes and aboriginal village dogs. The dingoes are naturalized wild subspecies of Canis familiaris and the aboriginal dogs are free-ranging ancient landraces that still live the village scavenger life style of the original dogs. 128 color photographs.
0 | 0 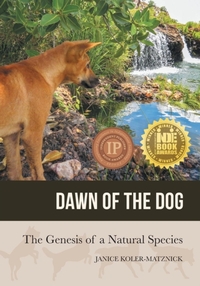