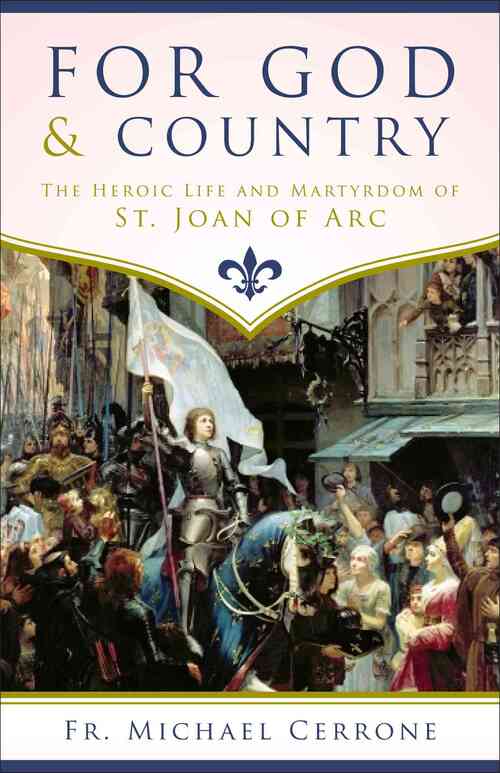 For God and Country

The Heroic Life and Martyrdom of St. Joan of Arc

She is not the typical saint. Born and baptized in Domremy in 1412, Joan of Arc was thirteen when the Archangel Michael appeared and exhorted her to safeguard her virginity. Two more heavenly voices later spoke to this daughter of God and revealed the divine Will for her to unify and liberate France from the English invaders.

With God's grace in her soul and in her soldiers, the seventeen year old Joan valiantly led battlefield operations to defeat the siege of Orleans and see the king anointed and crowned at Reims.

Captured as a prisoner of war, Joan of Arc was sold to the English in Rouen, brutally mistreated, then unjustly condemned by a corrupt church court as a heretic, apostate, and witch. While being burned at the stake, she forgave her enemies and invoked the help of God and his saints. The Catholic Church, with the authority of the pope in Rome, nullified her previous conviction and canonized Joan of Arc as a Saint of God in 1920.

In these pages you will discover the true character and accomplishments of Saint Joan of Arc, and be led to meditate on her profound legacy of virtue. You will be inspired by her heroic love of God and Country and will understand how prayer and the Church's sacramental life of grace gave her strength to overcome all obstacles in achieving her mission.

You will be amazed at the enduring impact of this soldier saint and virgin martyr on the rebirth of the nation of France and on the renewal of the Catholic Church, even six centuries after her birth.