The New York Times bestselling humorist Michael Perry makes his fiction debut with this hilarious and bighearted tale--a comic yet sincere exploration of faith in the face of the modern world.

Life is suddenly full of drama for low-key Harley Jackson: a woman in a big red pickup has stolen his bachelor's heart; a Hummer-driving developer hooked on self-improvement audiobooks is threatening to pave the last vestiges of his family farm; and inside his barn lies a calf bearing the image of Jesus Christ. Harley's best friend, Billy, urges him to sidestep the woman, fight the developer, and get rich off the calf. But Harley takes the opposite tack, hoping to avoid what his devout, dearly departed mother would have called "a scene."

Then the secret gets out--right through the barn door--and Harley's "miracle" goes viral.

"A hilarious glimpse into small-town life . . . combined with meditations on the meanings of faith, environmentalism, development, and romance."--Library Journal (starred review) 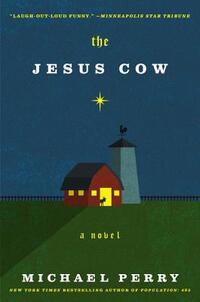