In 1974, three weeks before her twenty-first birthday, Charulata Apte arrives at Miss Timmins' School for Girls in Panchgani. Shy, sheltered, and running from a scandal that disgraced her Brahmin family, Charu finds herself teaching Shakespeare to rich Indian girls in a boarding school still run like an outpost of the British Empire. In this small, foreign universe, Charu is drawn to the charismatic teacher Moira Prince, who introduces her to pot-smoking hippies, rock 'n' roll, and freedoms she never knew existed.

Then one monsoon night, a body is found at the bottom of a cliff, and the ordered worlds of school and town are thrown into chaos. When Charu is implicated in the murder--a case three intrepid schoolgirls take it upon themselves to solve--Charu's real education begins. A love story and a murder mystery, Miss Timmins' School for Girls is, ultimately, a coming-of-age tale set against the turbulence of the 1970s as it played out in one small corner of India. 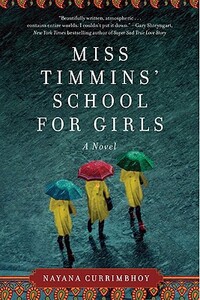